The production disruptions highlight a growing concern for the global automotive industry in 2021.

Mercedes-Benz maker Daimler joined its German peer Volkswagen AG in announcing it’s affected by the industrywide supply bottleneck, without quantifying the impact. Honda said it will cut domestic output by about 4,000 cars this month at one of its factories in Japan, while Nissan is adjusting production of its Note hatchback model.

In North America, Ford is idling a sport-utility vehicle factory in Kentucky next week, pulling forward previously planned downtime due to the chip shortage. Fiat Chrysler is temporarily closing a Canadian plant and delaying the restart of output at a Mexican Jeep factory until the end of January. The moves are aimed at keeping its other North American plants running, the Italian-American automaker said in a statement.

Even with auto sales down 4M from peak, parts for ECUs and Infotainment and a variety on onboard controllers will constrain production, at least through Q1

That news, along with the fact that the stimulus is bound to increase to 2k from 600 means $$$$ of used car through the roof …

A chip shortage that has disrupted vehicle production in other parts of the globe is reaching U.S. shores, stifling output for major car companies and dimming prospects for a smooth recovery.

Ford Motor Co. is planning to idle a Louisville, Ky., factory for a week starting Monday, because of parts shortages stemming from limited supplies of semiconductors now vital to everything from display screens to transmissions. The move will lead to the temporary layoffs of about 3,900 workers at the plant, which builds two popular SUVs, the Ford Escape and Lincoln Corsair.

Honda Motor Co. , Fiat Chrysler Automobiles NV and others are also wrestling with the shortage, leading them to reduce output on everything from big pickup trucks to compact sedans.

As manufacturers globally try to recoup production lost last spring because of the pandemic, many have been hit with sporadic parts shortages, shipping bottlenecks and other challenges related to the health crisis, such as high absenteeism.

Now, they are also dealing with chip shortages. The problem was first observed at Chinese factories late last year and is spreading to the rest of the world, as demand for electronics has surged during the health crisis, particularly with many people still spending most of their time at home. The global chip industry has struggled to meet demand.

Auto executives, lawyers and analysts said they were startled at how quickly the shortages cut into U.S. production, with several companies moving to revise production forecasts downward in the first working week of the new year.

The auto industry has emerged as a major consumer of computer chips in recent years, rivaling the personal-electronics sector. Demand is increasing as more car companies update the tech in their vehicles, decking them out with big, tabletlike displays and other features that consume more computing power than was needed in the past.

Additionally, the industry’s pivot to electrified vehicles is putting greater emphasis on the need for more software-based systems, analysts said.

Most of today’s cars have at least 40 different chips, with higher-end models having up to 150, said Sam Abuelsamid, an analyst at Guidehouse Insights.

“If even one has a production disruption, you can’t ship the car,” he said.

Problems appeared last month, when Volkswagen AG said it would cut production in the first quarter in China, Europe and North America because of a shortage of chips.

General Motors Co. sent a letter last month to its suppliers asking they move quickly to stockpile an entire year’s supply of chips to insulate from the shortage, according to a copy of the letter reviewed by The Wall Street Journal.

Honda is cutting production of its Civic and Accord sedans by roughly 2,200 cars this week in North America, down roughly a fifth from what had been originally scheduled, according to the executives.

Honda is evaluating options to mitigate production disruptions that are due to the shortages, a spokesman for the company said.

Toyota Motor Corp. now plans on making roughly 40% fewer of its full-size Tundra pickups at its Texas assembly plant in January than it had originally intended, a spokesman for the company said. The auto maker anticipates the chip shortages could stretch through the spring, the spokesman said.

Fiat Chrysler will idle its Jeep plant in Mexico and a sedan plant in Canada because of the microchip shortage, the company said Friday.

The shutdowns will last through the rest of January, according to a person familiar with the company’s plans. Affected vehicles include the Jeep Compass SUV, Chrysler 300 sedan and the Dodge Charger and Challenger muscle cars.

Fiat Chrysler doesn’t plan to reduce production at any other factories.

Dan Sharkey, a Detroit-area lawyer who works with auto suppliers, said he has been advising clients around the clock on the issue and can’t recall a similar crisis disrupting the whole global industry at once.

“One of our clients is calling it ‘chipageddon,’” Mr. Sharkey said.

Suppliers say the chip shortages and customers cutting back on orders adds to a growing list of problems they have to manage as the auto industry’s recovery stretches on.

High absenteeism caused by the pandemic, along with higher-than-usual shipping costs and other snags in the logistics network are also major problems. Some companies that have already cut costs during the pandemic say they don’t have much in reserve.

“In normal years, you might have some fat and could probably weather the storm,” said one of the supplier executives. “But we’re already beat up.”

—Nora Naughton and Mike Colias contributed to this article.

Write to Ben Foldy at Ben.Foldy@wsj.com 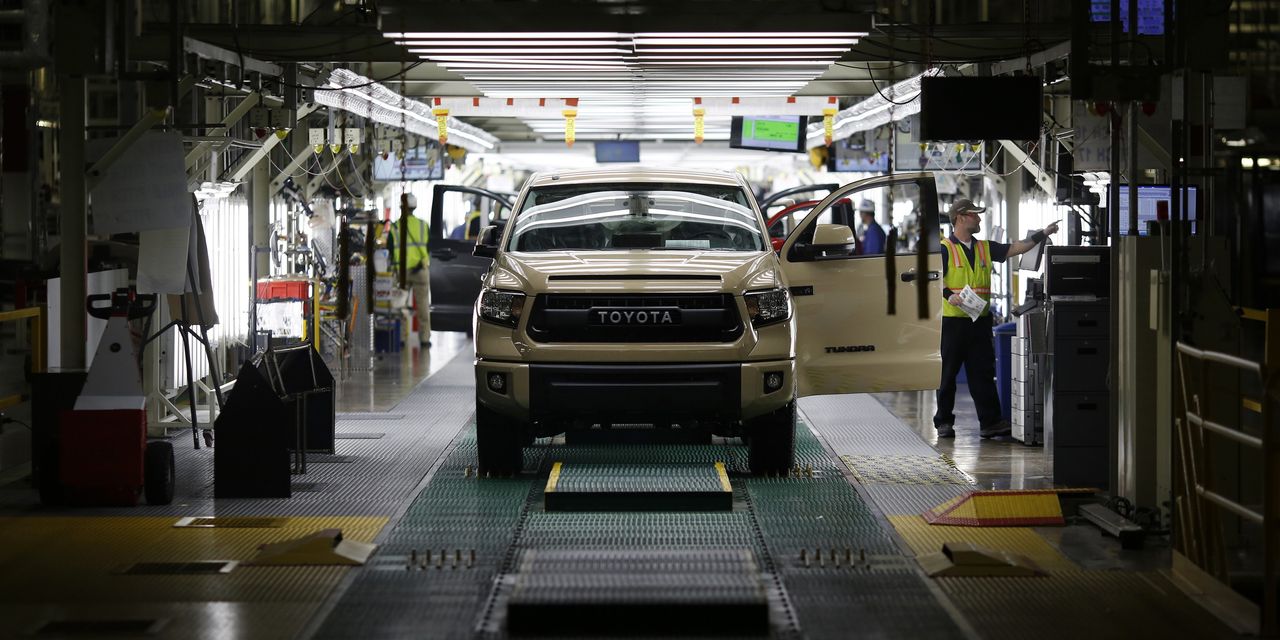 A chip shortage that has disrupted vehicle production in other parts of the globe is reaching U.S. shores. Ford is planning on idling its Louisville, Ky., factory.

“If even one has a production disruption, you can’t ship the car,” he said.

Unless you’re Tesla, then you just hobble together something from the plumbing aisle at Home Depot, slap it on the ass on the way out the door, and laugh as the stock price shoots up higher.

The good ol’ days, when the worst thing the worlds richest guy did was bundle Internet Explorer with Windows

Just saw this article and thought it might be of interest to the community. Looks like there is a chip shortage that is effecting production. Doesn’t look like the supply will get any better on some models.

A semi conductor plant had a raging fire in Japan in November. I typically have at the very least 15 tundras to sell each month. I had 3 this month and they all came from dealer trades…

Coupled with high used car pricing, inevitable inflation. This is a shit storm.

A fire that broke out at AKM Semiconductor Inc.'s factory in Nobeoka City, Japan, on Oct. 20 and burnt for more than two days has hit the global supplies of numerous digital-to-analog converter chips.