@trism I’ll post a public comment that’s not VIN specific so that others can chime in as well.

Think about who’s going to do your PPI if you have not already. Contact the seller to see how flexible they are, whether the car can be taken to a third party or whether the third party has to come to them.

I’ve given this some thought, and there are two downside risks… unexpected mechanical issues and undisclosed prior damage/repairs (which impacts value).

I’m relying on the CPO coverage for the former (at least for two years), and I’m inclined to take the risk on the latter since we aren’t talking about an exceptionally expensive car.

This topic is the main reason I’ve avoided even shopping for cars like this, and why I’m targeting a CPO. I honestly and truly don’t want to deal with the inconvenience, but I may not be correctly evaluating all of my risks either.

My $0.02…as bad ass as the M550 is, are you really going to pine after driving it when you already have a 7? IMO: get a 911 or a 981 Boxster S/Cayman S. None of that 4 cylinder turbo garbage in the 982. The flat six models are going to hold their value like the last of the water cooled 911’s have. They are very reliable and not expensive to maintain unless you’re going to a Porsche dealer to do it. Don’t be afraid of buying used…these cars don’t just suddenly self destruct to the tune of $10k+ like a mid 2000’s S class will

I drove almost 600 miles in a Turo 2015 Boxster S a few weeks ago on vacation in GA/NC/TN and was blown away by it. I’ve been a Porsche fanboy since I was a kid but never spent that much time in one. It’s very rare that the more I drive a vehicle the more I like it.

Can you PM me the link for the car? I will take a look. (Not the Carfax but the car and the deal in general)

I truly appreciate every single piece of input that was provided through PM exchanges yesterday/last night.

I drove the 911 this morning. I’ve never encountered anything that handles this well (dare I say perfectly?), and this one was clearly well cared for by its previous two owners. It’s a really beautiful car in very good condition.

Inside, it felt really old. It seemed charming and well made, but ancient, like the television encased in a real wood cabinet that my grandparents had in their living room, which is in some of my earliest childhood memories.

This car clearly has assets that, if used to their fullest potential, could compensate for some (or most probably all) of the things that bother me in what would mainly be an errand runner.

Here’s the car. I have no doubt that it will make the right owner extremely happy.

I also looked at a couple of newer Boxsters and Caymans (Caymen?). Neither excited me enough to want to drive one, but I would definitely consider a fresher version (2017+) of the 911.

Something like a turbo might be more for you, I always found anything less than a 4s to be underpowered and more badge chasing than anything.

I respectfully disagree with that on all accounts (badge chasing part).

probably jumped the gun there, maybe the power isn’t for everyone.

Still the carrera 4s is where the car starts to feel more exciting for me.

Again different folks different strokes, but I wouldn’t accept anything less than a turbo.

The gt3 rs is awesome but to me, the targa 4, carrera 4, turbo, etc etc make much better daily drivers from my experience.

Really depends on you personally and what you expect out of the car.

Went through a similar exercise a few months ago except my list include Lexus and excluded anything Korean.

Could not be happier with the decision. I doubt I would have been able to get a new X3 or RX350 (which were my other finalists) for same price though monthly lease payments would definitely have been lower. I immediately had it detailed and it looked as good as new. Mechanic said the engine, brakes etc. were primo condition.

Now ask me in 5 years when parts start to break and maybe you’ll get a different story. But for now I’m very pleased.

Considering that your example above is probably 7 years old, perhaps it’s worth a look at a brand new 911 carrera (not S). I just built one out on the configurator for $106k with the same options, more or less. Performance of the new generation base car would likely be better as well.

Ya and you figure this base car will only loose $20-30k over 3 years roughly so on a per month basis that’s not too bad.

Something like a turbo might be more for you, I always found anything less than a 4s to be underpowered

This one was definitely underpowered for what I’d want in a sports car.

Corners were fun, but I smiled exactly zero times when moving in a straight line, no matter how I drove it.

As a follow-up, sometime later I’ll post a comparison to leasing a new one, but for now:

** Dealer would put the first $5k on a credit card, so I used my Bank of America Travel Rewards Visa for 2.625% back.

*** I was planning to pay cash, but the Loyalty Credit required financing with BMWFS, so I took 0.9% for 36 months. Supposedly I have to keep the loan open for 3 months in order to keep the incentive, but it’s a simple interest loan so I can prepay almost all of it as soon as the account shows up on my BMW profile, and then let the last two scheduled payments take care of the rest.

The sun started setting on the way home, so the photo is a bit weak, but I’m sure you’ve all seen an M550 before. 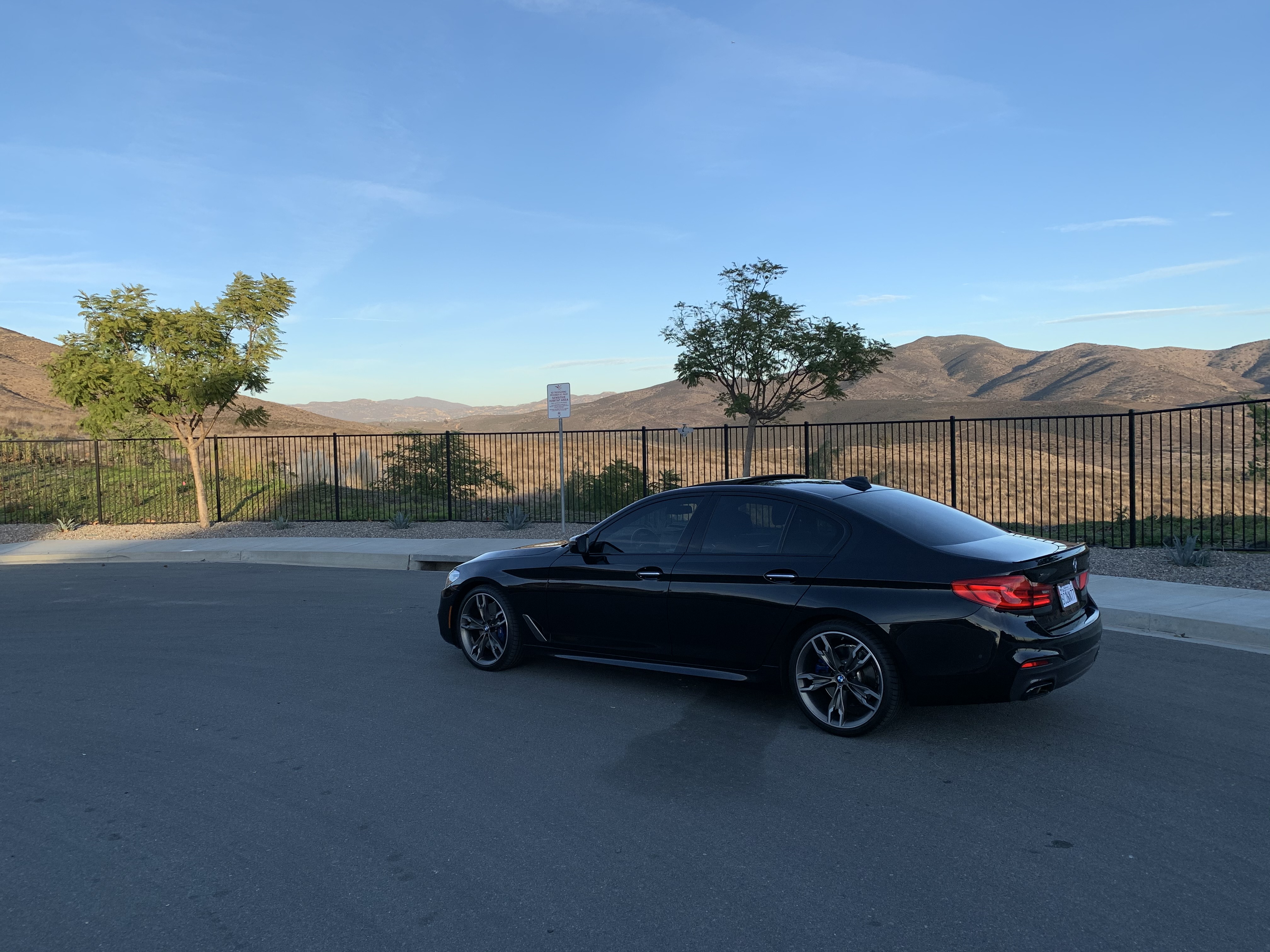 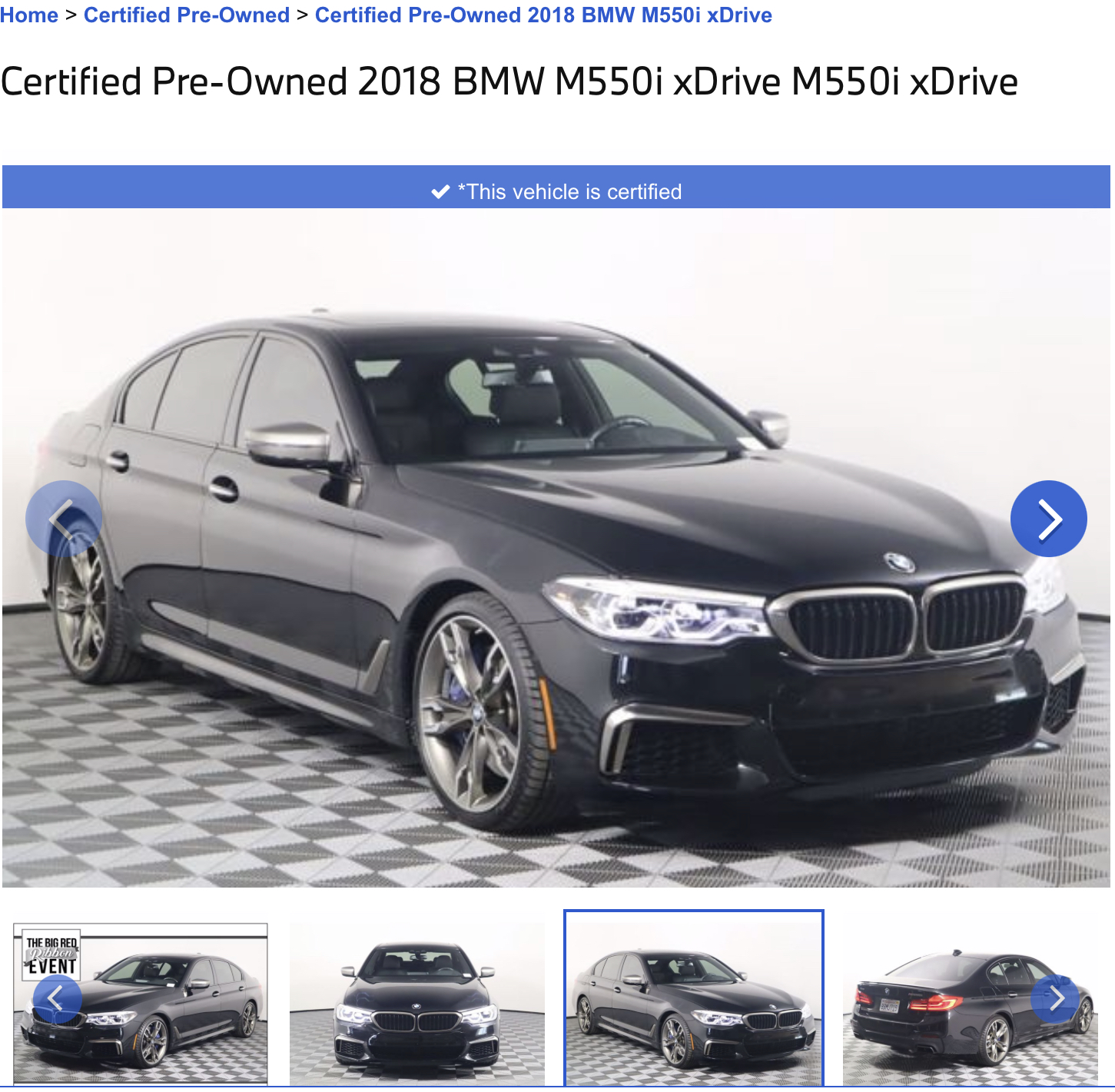 I really appreciate everyone who posted comments and provided feedback on all aspects of this shopping endeavor.

Even when tastes and opinions have differed from mine, the outside perspectives were always helpful, and I really appreciate it.

How’s the exhaust burble. Enjoy the new car by any measure!

In Comfort you hear virtually nothing, but in Sport Plus it makes itself known (but it’s far less compelling/obnoxious [depending on your point of view] than a Z4 M40i).

Nice! What packages/options does it have?

It isn’t heavily optioned. It has the Driving Assistance Package, heated seats, and the wheels you can see in the photo.

The only thing it’s missing from my wish list is Nappa leather, but this is the very nicest used vehicle I’ve seen on my recent shopping exploits, so it wasn’t worth holding out for something with the right seats.

The right question is “how big is the trunk?”