This is straight from a dealer’s binder
Enjoy!


[Album] Imgur: The magic of the Internet 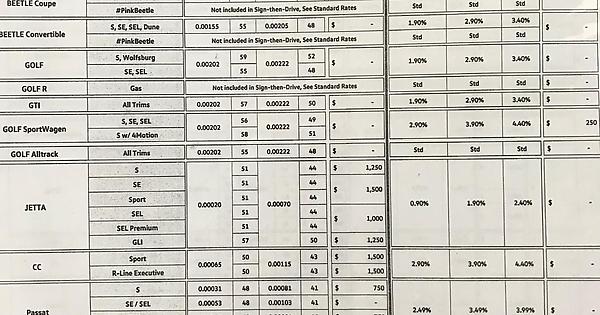 thank you for the great info !

even with A-tier credit, the interest is almost 5% ? is that normal?

Good deals on a GLI or a Tiguan S!

cant believe how low the residual is on the Passat, never dreamed a chevy would habe a higher residual

Yeah I was looking at a GTI myself but even with $500 under invoice (for the higher end version) it was still around 509 incl tax in LA. He brought the cost down to $33,647 as an FYI

what was the selling price? It should be less than $380 if there’s discounts.

33,647 was the final selling price. The MSRP I saw on that was in the high 30’s. I did not write that down unfortunately.

that would explain the higher monthly payments if the selling prices are above $30K.

The MF isn’t really great on the GTI.

Nothing on the eGolf…

This has been really helpful as I try to work a deal on a GLI. Does anyone have any experience trying to work the “Lease Dealer Bonus” into the conversation when you’re trying to get the selling price down? The dealers around here–Washington and Oregon–seem to be discounting the GLI anywhere from 4-5k and when I try to stack the lease dealer bonus of 1250 on top of that I get resistance. I was told that it’s a different program–not sure if that’s true or if they’re just maximizing profits.

Yes, I am in the exact same boat. Going to drive the 3 series this weekend and compare it. I did drive an A3 and that was super fun as well. Really nicely appointed interior and with the quattro it’s super fun on corners

What was the breakdown of your drive-off?

That’s as far as I can tell when I plug the numbers into the Leasehackr calculator. Seems like a pretty good deal when I consider ONLY GTI’s but it’s frustrating when I can get a Jetta GLI that has a $2600 higher MSRP for less than $260 a month with zero drive off.