Hello,
Anyone got good lease for Subaru Ascent so far? Especially Subaru Ascent Touring.
I was impressed with this car, over Atlas GX460 MDX.
I emailed some dealers and seems the car is too new, there is no discount.
I plan to lease Subaru Ascent after my Lexus GX460 lease ends.

GX460 is a great car, especially the sound is so great (better than BMW I leased before). But I dont’ lke because its cargo is too small, not good for travel. QX60 and MDX also has small cargo.

Plan to have a bigger car this time for wife and I am impressed with Ascent. She drove Ford Expedition x 3 years and always loves big car. She does not like Pilot or Highlander.

My comment was tongue in cheek for the brand and styling. I don’t think the Ascent is any bigger than an mdx or qx60 and if so, marginally. None of these are close to an expedition but the Traverse and Atlas are the biggest in the midsize 3row.

I don’t think the Ascent is any bigger than an mdx or qx60 and if so, marginally.

I think it is way bigger, actually. At least it seemed that way. But I did not look at the other two. I don’t think it’s smaller then Atlas, either. The best way to know is to look at specs, I guess.

After driving MDX, CX-9, Ascent, Atlas I think the Ascent is the best, with the MDX coming in at 2nd. Ascent is very spacious and comfortable inside I think even more spacious than an atlas IMO but the Atlas interior quality, perfomance was the worst out of this bunch with the MDX being the best. The ascent might not be the best at anything, but its the best package all together. Hopefully I can get one at a good price

Good point. Here’s the specs rounded behind 3rd / behind 2nd:

However, the above doesn’t necessarily reflect what’s usable.

Yeah, Atlas is bigger, but interior dimensions are comparable to Ascent’s, though cargo volume is way bigger in Atlas. But passenger volume is the same. MDX and QX60 are smaller inside. Shows how much I know about large SUVs. 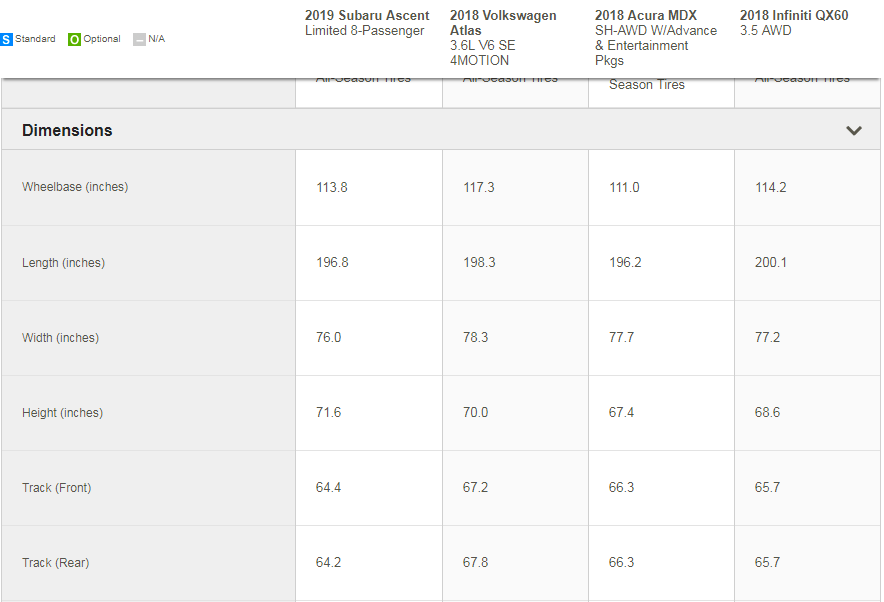 Thank you Ursus for above info.

Until now there is no discount for Subaru Ascent in SoCal. I emailed 4 different SoCal dealers and no discount. one of them even has no idea about lease.

Yep, too early for that. But the good news is they build them in the US, so no tariffs and they should get to the lots faster.

Yeah, Atlas is bigger, but interior dimensions are comparable to Ascent’s, though cargo volume is way bigger in Atlas. But passenger volume is the same. MDX and QX60 are smaller inside. Shows how much I know about large SUVs.

I find it more interesting that people refer to those vehicles as large SUVs.

They are not? Look huge to me

These are large SUVs (and what I would consider smallish versions of large SUVs).

Well, I know. But for me Forester is small, XC90 is mid size, Atlas is large and Suburban is XL

We test drove a Touring-spec Ascent today and liked it a great deal. Far more than we thought we would. Coming from a BMW X5.

We didn’t get down to brass tacks, but, when I asked the salesman how they were leasing out at 36 months, 10K/year, $0 cap cost reduction, he said around $650/mo for a Touring with a couple accessories e.g. trailer hitch, all weather mats…that sort of thing.

For a vehicle with a sticker somewhat shy of $50k that’s not a very good lease price. Hopefully others are finding better.

Not trying to split hairs, simply noting that $650/mo is crazy for what should be $4xx/mo to be a “good” LH lease.

The monthly on these should be easy to compute…RV and MF from Edmunds as usual…selling price right now = MSRP or very close.

It is terrible, sure. But there are only few of them on the lots. My dealer didn’t have any Tourings, and the ones coming were in $46-47K range. I’d just buy one, my wife liked it for some reason.