I know most brands announced their memorial day specials already but in past years have you seen any last minute programs come out last couple days before memorial day ?

Since the question gets brought ad nauseam every single holiday at least once, and usually more, here’s your auto leasing PSA for the week… HOLIDAY SALES ARE A PURE MARKETING GIMMICK TO GET YOU IN THE DOOR. [image] Back to your regularly scheduled programming.

As far as I’m aware Memorial Day sales events are all smoke and mirrors with little to no factory support.

Yes it will be all on the dealers to discount prices further to hit their numbers. OEM incentives don’t usually change in the last part of May before the holiday weekend.

Yes and no, as usual many dealers will try throwing any wrench into the mix to muddy the waters on the unsuspecting consumer who thinks they’re getting a great deal just because it’s a holiday.

normally after May memorial day is June incentives worse ?

There is no “normally” in regard to setting RV/MF. Could be better…could be worse. You never know until the numbers are released.

There are patterns year over year. (I.e. clearance of the previous model year in March.) The best way to predict is to look at how they changed last year, but it isn’t consistent.

While there may be certain “trends,” those shouldn’t be taken as gospel. Everyone was waiting for the GM Asian conquest in March…,which never came this year. Lease support for BMW ended in March last year, ended in April instead this year to the surprise of many, and is even continuing in small pockets in the US in May. If manufacturers reign in inventory, there’s far less incentive to offer a blowout. There’s some of that happening.

In other words, if you have a solid deal lined up, I wouldn’t wait to see what numbers will be like in 2 weeks, or you may miss out altogether. If your deal is ho-hum and you aren’t in a hurry to get a car, you might as well roll the dice and see what happens.

Everyone needs to realize what incentives are. They are set a couple weeks before the month end and are a reaction to the current month’s sales velocity and inventory levels.

So they are frequently oscillating around the long term average at the model level with occasional spikes to even out advertised monthly payment deals when the RV takes a dive.

Some captives and banks use a 3rd party RV forecast company as the starting point for their RV setting and will track fairly closely with their bi-monthly value changes. So if they are consistently +3pts over that firm’s values, they will often roll through whatever RV changes are published (1st of each odd month) in their values.

There will besome big changes this summer by that firm where some models are going up by as much as 5-6 pts and others going down 5-6 pts so there will be some interesting deals popping up or going away when that change happens if that captive rolls through ALG’s changes.

thanks for the feedback

I am in the market for large luxury suv my maturity date is May 30th but Acura financial gave me extension until June 10th for return . I am kinda hoping to score deal by end of the month but if not first two weeks of June would work.

I said it before and I’ll say it again, I’m holding out for Cesar Chavez day, that’s where the real deals are, or look for this 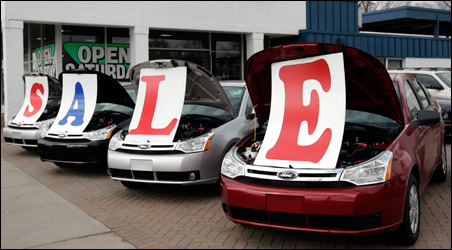 I know it’s a marketing ploy to get butts into the dealership but Bridgeport BMW in CT sent this email. Might be worth a call for a discount.

Looks like a standard dealer email, classic save UP to Would you say it is better to buy now or wait for July 1st to lease?

“Double factory incentives” I don’t know if it gets any better than that, you better act now while supplies last.*

People will fall for this crap…guaranteed.

Get a deal done Last week of June

I can even picture it where the deals are even worse than usual. They will focus people’s attention on the "double " incentive and not offer any additional dealer discount. With a sense of missing out people will be running to sign.