Just a quick observation. The money factor is marked up. It should be .00166. You should ask for more off the sales price. What does the down payment include?

Thanks for you input! This is my first car lease and I’m new to the forum.

I need a new car by the 27th, and so far the 4 series is top of the list in cars I’ve test driven. I don’t feel like I absolutely must have it, but it’s definitely the nicest within the budget I’m looking at.

How do I get the MF down? The salesman said it’s set by BMW financial and can’t be changed. I have Tier 1 credit.

The salesman said it’s set by BMW financial and can’t be changed.

BMWF sets the mf at 0.00166 and it cannot go lower but some dealers will raise it to make extra money. I think the max they can raise is 0.00050 over the base rate.

That’s the problem with doing a lease the month you need a new car and are pretty specific in what you want. If there are good MFs/Residuals that month on the cars you’re interested in, you’re golden, but otherwise, you may be in trouble.

Take a look at Alfa Romeo of Glendale. They are running an advertised special of a Alfa Guilia TI for $399 plus tax, with 0 down. https://www.alfaromeoandfiatofglendale.com/alfa-romeo-giulia.

It was at Crevier. I’m not advertising for them lol

Find the incentive sheet on this forum, it’s around for this month and screenshot it over to these clowns and say you want the buy rate. And throw out an offer for another couple grand off and see what they say. You can’t feel like you’re offending them, remember they are car salesmen, I use to be one, they aren’t easily offended.

20% off MSRP for a BMW loaner isn’t offensive. It’s an aggressive, but not unreasonable offer.

So I looked at the loaner sheet from the forum (pictured below) and it shoes $3000 lease credit on a 4 series with $1000 loyalty. That is exactly what he gave me in the deal. 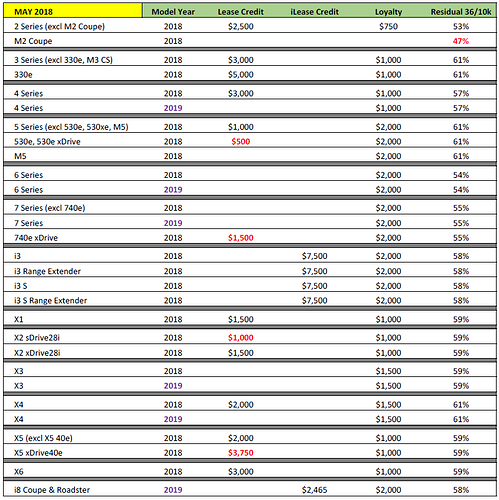 If they give you 20% off and your heart is set on a 440, you should probably take it. You can ask for the buy rate, but 0.00010 is a difference of about $300 over the life of the lease, and they have no obligation to give it to you. There’s nothing sneaky about marking up the MF. But LA is the land of BMWs, very easy to shop around.

I would try to shoot for 20% but as @conanohasselhof said, it maybe hard to get on a 440. It’s more rare then a 430. But as before, never hurts to ask. The other thing I would do is, if you can, go in, make it known that you’ll sign and take the deal that minute if they work with you on the price, be just and firm but reasonable. Don’t play too hard as I have seen dealers simply say no and walk away. I have seen instances where dealers have ran out and grabbed my friend to bring him back to the table but also have seen dealers say goodbye and not look twice. Can you guys tell me if I am getting taken for a ride here. Feels like it. You are correct they are awful. That’s m3/4 money.