Trying to make sure this is a good deal… first timer here.

As far as I can tell using the calculator, they have rolled in the $595 acquisition fee and first months payment as they mention 24 month lease with 23 payments.

Save the environment. Don’t lease a car that wii be in a landfill in 5 years.
Leaf owners get to be cheap at everyone else’s expense.

They have a new model in the works - which likely explains why they are providing such large incentives. Seems like they are practically giving you the car at this price. I’ve leased a couple of Infiniti cars though their VPP program - I don’t recall discounts that large before rebates. Perhaps the dealer is discounting below VPP? Very nice deal!

awesome deal, i paid a ton more for my leaf

Save the environment. Don’t lease a car that wii be in a landfill in 5 years.
Leaf owners get to be cheap at everyone else’s expense.

What does this even mean? I suspect nearly all 2011 Leaf’s are still on the road, and suggesting the Leaf is a bad car for the environment is quite a stretch. Certainly the first two years had pretty lousy battery degradation, but the new cars are much better.

Regarding the original deal, I’d say it’s a pretty good one. Just make sure you’re OK with the range the car will have under worst case conditions (cold weather, mostly). It’s also best to install a 240V EVSE in your garage for reasonable charging times.

And what does the low residual do for resale value? A used leaf is $8k with low miles. What a joke. It is also an eyesore that only the aesthetically challenged would consider. Trust me, it is the next Pontiac Aztec. Have you seen one of those lately on the road?
Not to mention the fact that a Leaf isn’t worth maintaining, and a minor collision would be a total loss. They will all be worthless very soon.
General demographics: married, no kids, no taste, and did NOT buy it to save the environment, but because it penciled out.

There’s barely any maintenance at all on them, and by all account the few wear items like pads/rotors last forever due to regenerative braking. Again, a good deal for people who’d rather not have oil changes, transmission fluid changes, brake work, etc.

Thanks for the confirmations of the deal.

Married. Two kids. Commute 32-40 miles per day. Am buying it to reduce use of fuel. At this price my commute savings alone will make it near free compared to my current vehicle - and zero maintenance costs. I’d be happy to buy it and drive it till it dies afterwords and at this deal setup it is cheaper to lease first then buy (after turning it in of course and buying at the real used price).

I’d rather purchase something else due to styling, it’s awful, but price is a factor. I3 isn’t good for kids due to those doors and parking lots, and the seat backs ripping from their feet. Bolts are much more expensive and sold out around my area, and the eGolf is sold near me in Oregon, but no dealers around me in Seattle will service it in case of any issues.

Range is ok for me due to the wife having another car that we can use for larger trips, etc. I probably wouldn’t buy this as my only vehicle until range approaches 250-300mi.

Personally, I’d much rather support my local power grid (or maybe invest in solar) instead of the Oil billionaires that are fighting this effort tooth in nail. As with everything there will probably be some unintended consequences, and I hope they are less impactful than the other alternatives. I can easily see these being an economical car to let our kids drive when they start driving to school and the mall, etc. 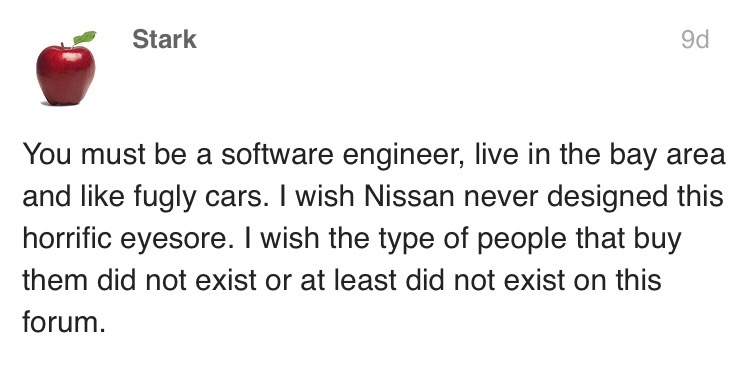 Another recent post from Stark - likely the most offensive post of the month. Most people visit this site for productive sharing of information to achieve outstanding auto leases. A very few people do not.

Congratulations again on getting a nice deal.

I’d be happy to buy it and drive it till it dies afterwords and at this deal setup it is cheaper to lease first then buy (after turning it in of course and buying at the real used price).

Sounds like you’re a good candidate for the Leaf, and that’s well within even worst case scenarios for range with a large buffer.

Also, Nissan has often discounted their leased vehicles when the market value is substantially below the residual. This is a multi year thread but gives you a flavor of what’s happened.

Wow that may just be the most offensive post I have ever read on here.

“Am buying it to reduce use of fuel. At this price my commute savings alone will make it near free compared to my current vehicle”

$169 per month buys a lot of fuel, plus the maybe $30 estimated bucks per month to charge. What do you drive that costs that much in fuel?

Older 535i. Gets around 18mpg average. Premium gas is ~ $3/gal. Figure with a few trips on the weekend hauling around the family for errands and kids activities I can help shave off some more expenses. The remainder I’m paying per month on the leaf seems like it would be less than monthly depreciation especially after you also bring in cost of oil changes, wear and tear on tires/brakes, etc.

I know I could get a better MPG car as well that would probably dilute that a bit, but I like the idea of a new car with warranty, no maintenance, and no more gas station stops.

I still say the leaf is part of the problem and bot part of the solution. It isn’t even the best deal for cheapo people trying to save a buck. Every leaf I see offends me as much as every one of my posts offends you.
The very narrow market the leaf serves says it all.

I agree. $199 per month is high. If you just want to save money, the leaf is not the best option. Also plenty of leases that have free oil changes.

Would you be willing to elaborate?

What a slag you are.

I bought a Ford Focus Electric and the monthly is almost the same you’re paying for the lease. It took my 1999 land cruiser off the road as a daily driver. The cruiser has steel front and rear, sliders and a skid plate so I’m lucky to get 10mpg. The electric car isn’t the snazziest or the coolest but the savings in gas alone pays for it. I traded $200+ a .month in gas for $12mo in electricity and a third car.

Trust me, it is the next Pontiac Aztec. Have you seen one of those lately on the road?

What was your payment on the Ford? I might have to take a look at those too

Nice deal. Can you pm me the dealer details?