Does your sale price include any other Volvo allowances?

Decent deal but high drive offs due to extremely high doc fee, Get them to reduce the cap cost to 43k even or preferably 42k. 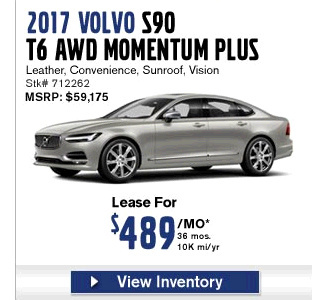 Thanks for the quick responses!

They won’t share the deal sheet over email, which is making me ready to walk, but I am emailing the “manager” now so we’ll see if he want’s to be straight up.

@vhooloo, where is that ad from? I am going to use some of the Pull Ahead reimbursement to cover the drive off.

It does include the 2000 Volvo Allowance.

I did not know about the S90 Lease Bonus Dealer Cash. I didn’t see that on any of the offers pages.
What is the best way to ask them to include it (would bring the Cap Cost to 41500)?

I’m in Florida so the Doc fees are ridiculous. This is down from 999.

That deal is from Norwood Volvo, MA home of my 229 a month S60 deal of last year. And the CCR is 3k to get to that payment but it is for a much higher optioned car with only 10k miles. So based on that, your deal is not bad.

I also checked inventory and this dealer alone has 18 new and 7 gently used S90s for sale (with less than 100 miles). So I am going to revise my above opinion and say 15% is not enough, go for the jugular and get 20% off MSRP + lease cash.
Honestly I think after the 2-3 month hoopla, these cars are languishing and would be ripe for getting at payments of 0.75% of MSRP.

There is an extra $1,950 AWD cash for T6 AWD.
First off - get their selling price BEFORE any allowances/rebates, then deduct $4K, but it looks like a good discount. But @vhooloo thinks it’s not enough, no surprise here

The same time last year Volvo started throwing a lot of cash to move cars, close to $10K on S60. So probably there will be better deals during the next 2-4 months.
BTW: I wouldn’t blame them for not willing to show the numbers in emails. If you have time I suggest just go there, look at the numbers, but do not commit to anything.

@Ursus Thanks! I will definitely use that.

I have learned from lurking here to ask for the selling price before incentives. It has been occasionally difficult to get them to tell me - the whole “what payment are you looking for” shtick. But you can always move on to the next dealer.

I have presented the offer basically as structured in the post, so you would think they would see I was serious.

@vhooloo I would love to swing a deal at 0.75%, especially for 15k miles. As I have already started negotiations, do you suggest moving to the next dealer and re-starting there?

@Ursus What do you think about just calling into Norwood and having it shipped down to FL? Do you think they will go 20% before incentives?

I don’t know anything about them, @vhooloo probably has better idea. But I don’t trust these ads in general - ‘only one at this price’, ‘just sold, but we have others at similar savings’, etc. Like I said, don’t be afraid to go to your dealer and talk numbers. No one can force you to do anything, just be firm and tell them that you are ready to buy, but will let them know next day. Also, contact others in you area.

@Ursus No , Don’t “need” AWD down here in Florida.

@vhooloo I am going to search the forums for your 229 a month S60 to see what I can learn!

I will spare you the search. You are not going to learn anything about the 229 Volvo S60.

No there was no grind, no hardnosed tactics, no epic back and forth. Pure dumb luck and opportunism. I saw their ad, went to test drive and signed in 1 hour. It was like the Maserati lease deal - you just know it is so good, you sign. They had 3 in stock and they all sold that day.

Now that the S90 seems to be not selling, then asking for 40k price on a 52k car does not seem outlandish. Just a few months ago when the S90 had just launched, it was probably going for sticker.

Looks like Volvo goofed up in their S90 strategy - the US market does not seem to think the S90 is in the same league as an E-class or 5 -series. People are reporting 20% off MSRP on the E-class anyway, so why would I walk away from a $400 payment on a 60k E class and pay more for a 50k S90?

Somebody already asked that question and Norwood will work with you. Not sure if they will ship but the flight here is relatively painless [and the drive back is doable in 2 days easily]

I would qualify for conquest 1k. I would push for 20% off MSRP. How does that sound? I only consider tax inclusive since I pay tax on the full price, otherwise - deceptive practice

I got 15% off a Porsche today, seriously considering pulling the trigger

Not necessarily, but anything is possible. Is it possible today? I don’t think so

This weekend, seems like dealers are going big. 20% off to me sounds doable.
In last few months, I have easily obtained 20% off Jaguar F type, E class and Volt. If you are a sedan buyer right now, life is good. Everyone wants SUV.
S90, 20% no probs. XC 90, you’d be kicked out of the showroom