The deals posted here are almost always specific to a region on a specific make, model and through a captive lender. Onec you have narrowed down the specific vehicle you want, if a credit union has a lease deal available that is close to a captive or non-captive lender, at what payment advantage would you consider going with the credit union?

Now the same question regarding the lease term. You’ve picked the car you want and there is a monthly payment on 48mo close to a 36mo or 39mo. What payment advantage would sway you to take the 48mo lease?

Full disclosure, I manage RV risk for a financial institution and have been setting RVs for well over a decade at both captive and non-captive lenders and at a guidebook. I just discovered this website yesterday and can’t believe it slipped by my radar for so long.

What payment advantage would sway you to take the 48mo lease?

Personally, I would not do a 48 month lease - too long and out of warranty.

The 48m lease hardly tends to even come up in conversation…IMO due to:

1> Warranty. Most mainstream OEMs are 3yr warranties. Even 4yr warranties (typically 50K) might be exceeded depending on how much one drives

3> Marketing: this place might be an exception, but surely most of the leasing traffic entering dealership showrooms is driven (pun intended) by marketing. 36m tends be the ‘norm’ with some 24 and 39

Would be interesting to get your perspective on how RVs are set.

The deals posted here are almost always specific to a region on a specific make, model and through a captive lender. Onec you have narrowed down the specific vehicle you want, if a credit union has a lease deal available that is close to a captive or non-captive lender, at what payment advantage would you consider going with the credit union?

Interesting hypothetical, but I see some seemingly insurmountable practical hurdles, such as how would the average lessee even know of such a CU (how would they afford such an ad budget) and how could a CU afford to take a loss on the low MF driving many of the best deals (.00050 or lower, with or w/o MSDs)?

The Credit Unions that are set up to do leasing, and there are only a handful currently, have a couple dealer reps in their small pockets of coverage that go out and present the sweet spots where they have a payment advantage over the captive and other non-captive lenders on specific models.

Credit Unions have the advantage of low cost of funds so they can set a MF much lower than the captive and other banks and still stay profitable. They own a large portion of the used car financing business and to some extent the new car financing business as well because their car loan rates are so attractive compared to the bigger lenders.

Ok, in that case a payment advantage would make a CU lease look quite attractive IMO (obviously any number I throw out here re: “how much” would just be pulled out of my you-know-what, but the bigger the advantage the more likely a buyer will be swayed).

It would help if there were online reviews or forum chatter that gave lessees confidence that lease turn-in inspections (and any charges, if applicable) would be similar or more favorable to consumers than the captive equivalent. + the ability to swap out of a lease if they found a qualified new lessee to take over the lease.

In the captive world, leasing is really used as a tool to build customer loyalty. Lease customers tend to be consecutive lease buyers and also tend to stay within the captive if they have a good experience. On a term comparison, however, the loyalty for 48mo leasing is the highest, followed by 36mo then 39mo and lastly 24/27mo. This is all do to the monthly payment sticker shock one gets when they come out of those insanely cheap leases floating out there (24mo/10k at most lenders takes the cake from a high risk RV stand point).

Conversely, the 48mo lease customer wasn’t baited into the deal with an overly incentivised RV/MF combo so when they come back to buy their next RX350 (for the 4th time in a row) they have a good idea that they can still afford the monthly payment.

So are the captives with the insane deals essentially assuming very few people will renew their leases at realistic (i.e. much higher) levels in 2-3 years?

A lot of the captives in the luxury sector have payment waiver programs that allow you to waive some payments in exchange for staying in the family on your next lease. They are constantly brainstorming of things to try out but rarely have a great way to measure the success of those types of programs. I think a couple mainstream brands are trying that as well.

Then the other aspect of leasing is how do you deal with all the off lease volume that isn’t bought at full RV and ends up selling at market prices be it at auction or upstream directly to another dealer. This is the return ratio, and some captives are seeing rapidly increasing return ratios on many models. Some do that on purpose but have agreements in place so dealers are forced to buy a certain percentage of their off lease volume.

The industry is experiencing an insane volume (compared to past historic highs) of vehicles that are coming back with actual values well below the RV. RVs set on the new cars are then set at lower amounts, or the captives and sales divisions are reserving higher amounts for future losses if the RVs are to remain high.

Monthly payment on a 48 month lease would have to be significantly lower than the 36/24 month options…otherwise it wouldn’t be worth the risk that the leasing customer is exposed to for possessing a vehicle out of warranty those last 12 months, especially since most non-luxury manufacturers offer only 36 month b2b warranties.

Another thing is a lot of people that lease lease because they get to change cars more often. Being locked into a vehicle for 48 months must not be appealing…might as well buy at that point then.

Yeah, I see 48mo leasing, and leasing in general as an inexpensive way to buy a car with the option of walking away if the RV was set higher than actual depreciation. Often times recently, the 48mo RV was set too low so you would want to buy out the RV at the end of the lease and flip the car.

thats wrong! I leased a buick enclave for 48mo and it was covered for full term!

Yes Buick, Caddy, and some other higher end brands do cover 48 or even 60 months bumper to bumper. You are also getting into the mileage where tire replacement, other fluid changes besides oil, possibly brakes and other wear items are becoming necessary that I do not want to have to pay for before I turn the lease in. That defeats the whole purpose of leasing in my book.

It’s not “wrong” - I expressed my opinion and most cars I’d be interested in have 36 month warranty. And I agree with @adamcar, and did not even go into that:

You are also getting into the mileage where tire replacement, other fluid changes besides oil, possibly brakes and other wear items are becoming necessary that I do not want to have to pay for before I turn the lease in. That defeats the whole purpose of leasing in my book.

Sometimes the answer is, “It depends.” There are also costs to more frequent lease terms. You pay the LAF (acq fee) and TTL each time. Everyone here is savvy enough to know that, even if the drive-off is just $0 or the first month payment, those items are still being paid. In fact, when you capitalize those items into your lease payments, you are paying interest on them (and, depending on your state, taxes on them).

OTOH I can see the stereotypical Buick lessee doing 48/10k driving between Boca Raton and Palm Beach, and never paying for anything other than oil changes (no tires and certainly no brakes).

I only just got my first lease (a Spark EV on firesale), so I guess i’m not really a “lease guy”, more of a “own the car until the wheels fall off” guy.

You know what would be interesting? Leases on used cars. There are a ton of 3 year old cars available on the market (because of leases, lol), and since CU’s tend to have used car financing as their bread and butter, used car leasing might be really good.

A used car buyer/leaser would already be more emotionally prepared for having to have maintenance done to the car, presumably.

Some vehicles can go many miles without new tires, others seem to eat them. Same as with brakes. All depends on vehicle and driving style and other factors. I bought a used MKT with 21,000 miles and the tires were almost done. On the other hand, our Avalanche could easily go 50,000 and the tires were still looking good. Some vehicles also call for some costly maintenance at around 30,000 miles that I have no interest in paying for the new owner. It is also nice to never have to pay for an oil change if your leased vehicle has them covered for the first 2-3 years. 2017 Lincoln vehicles will now come with a service that the dealer will come pick up your car and leave you a loaner while you get an oil change or other service. That is not a dealer option, that is required.

I agree with @EasyRhino regarding leases for used cars. Not knowing a lot about how this all works compared to you guys, this seems to be an underserved market. From what I have heard, it is all because of the inability to predict the RV 3 years from now for a 3 year old car. It seems like there is enough data out there to make this a predictable math problem …

Note: I have done a 2nd lease before (1st lease on 2000 Porsche Boxster 36k/10 and then did a 2nd lease on it after 36 months for another 36k/10 and returned it after) but it was easy because I was the original lessee. But if I wasn’t the original lessee, I doubt I would have been able to get the 2nd lease done. Also, I was just focused on the monthly payment and not anything else so didn’t really know the terms of the lease for either the 1st one or the 2nd one. Back in the day, any Boxster that was available was gone in 10 minutes.

I see the Renegade being “pushed” for 42 and 48 months. In fact, the standard renegade factory offer states 48 months. Maybe Op works for Chrysler lol 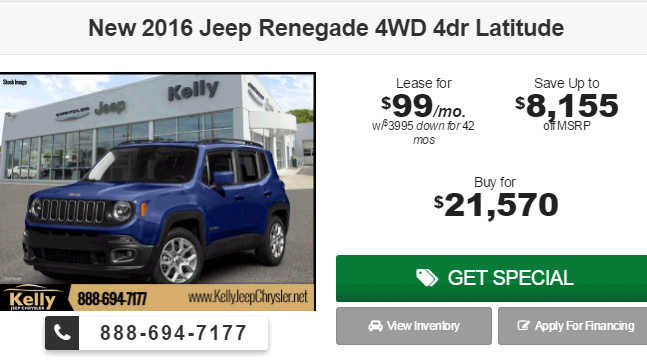 I agree with @EasyRhino regarding leases for used cars. Not knowing a lot about how this all works compared to you guys, this seems to be an underserved market. From what I have heard, it is all because of the inability to predict the RV 3 years from now for a 3 year old car. It seems like there is enough data out there to make this a predictable math problem …

There was an article in the WSJ about 6-9 months ago, which said that with more data being available, lease co’s like BMWFS had decided to start CPO leases. I guess it takes a lot of time before dealers really get into it, or they are wary of cannibalizing new car leases.