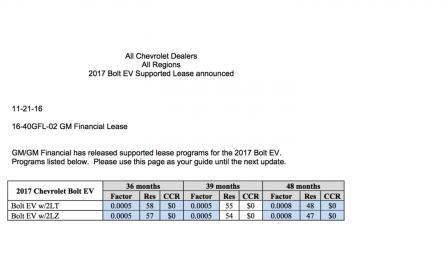 That looks pretty good. Very low MF which is good for a company with no MSD’s and 58% is not the end of the world. With the rebates you should get some good numbers out of that.

I’m hoping there are some unpublished “select market CCR” or something that will be available at least in CARB states.

But looks like anyone who reserved one will be able to lease…even if they aren’t CA/OR residents! Maybe not as bad as my first take.

GM Financial always publishes residuals for 15k miles, so a 10k mile/year lease would have a 3% higher residual. So 61% for LT, 60% Premier.

A 39 month lease? Never have seen that term before.

Thanks for the information bro1999.

Now we just need to know how much of the $7500 federal they pass on.

That would be terrible - would cancel my order for sure. Why would that only be CARB states when $7500 is federal rebate?

Non-CARB state sales count for 0 ZEV credits, while sales to CARB-state residents are worth 4 credits currently. Rumored value of 1 ZEV credit is around $3.5k, so that’s $14k in ZEV money GM doesn’t receive when making a sale to a non-CARB stater.

Looks like bad news for people looking to lease in non-CARB states, but that’s just economics. You can still buy and receive the full $7.5k credit.

at least they’re predicting a better residual than the Spark EV.

thanks for the numbers bro… it ought to be interesting when people start signing deals.

Its a fair deal with the 60% residual to hedge against the difference of having only a $2500 rebate when I think many of us were expecting closer to $7000 like the Volt or the Sparks $10475.

Of course its a brand new model & GM really held out on releasing their final decision on programs once Motor Trend named it their " Car of The Year" just last week.

Car of the year + less range anxiety with 200+ mile range takes a huge market share away from Tesla and gives the BMW i3 a run for its money.

We’re supposed to receive our supplier discount bulletin on the Bolt any minute, we should be a few thousand off MSRP.

My local CA dealer quoted me 48% residual and 0.0005 MF on a base model Bolt (36/10) today. Said he was still waiting for the lease cash #'s - perhaps they raised the residual to account for this?

Honestly, I’m not sure how GM thinks the Bolt will be worth 10% more than a Volt in 3 years, especially with the Model 3 on the horizon. UNLESS they are indeed inflating the residual.

Bolt EV lease deal now a frontpage article.
Do we know 100% the CCR is CA and OR only? No other CARB states qualify? You’re right. It’s all CARB states, though states other than CA and OR won’t be getting them until 2017.

That said, if you’re in MD and lease from a CA Or OR dealer, you’d still get the $2,500 Incremental CCR.

Don’t think I want to lease one as a MD resident! Bolt configured to my wants comes out to…$530/month.

Might as well buy one instead at that lease price.

Maybe it’s just me, but the pricing on this car seems high. I understand that the main selling point is range, but I can’t see leasing the base model for over $300/mo.

That being said, it will be interesting to see how many of these are leased at this price point. I figured loaded it would be $300/mo.

Guess I’ll wait to see how pricing changes for this, as well as what happens to the pricing of competing ev options with less range (e-golf, i3 specifically).

Thought of adding my 2 cents. I would have preferred a Sonata Hybrid plug-in, or Fusion Energi due to larger size, but my state AZ do not allow hybrid plug-in in HOV lane (they allow, but max plate allocations ran out). All EVs (alternate fuel) can get HOV plate (no number limits), so for that purpose I was looking forward to lease a Bolt. But will wait and see how the lease pricing and availability changes in next few months. Main selling point for Bolt for me is access to HOV lane!!

Maybe it’s just me, but the pricing on this car seems high

To me the pricing on all of the electrics seem high, before rebates. I mean, I just picked up one of the 2016 Spark EV’s and the MSRP was still $26k… for a tiny little clown car. On no planet is it worth that much.

I think battery cars are just really expensive to develop. And bigger batteries even more so (look at difference between Tesla P60 and P90). And I also think the manufacturers are trying to capture some of the government’s largess into their sales margin.

Just talked to a coworker who got a Volt when they were new, and her lease is huge. So they’ll come down eventually, it will just take time.