Looking for some feedback on how I did. Here’s a picture of the total breakdown for the lease: http://imgur.com/a/l2Ipn 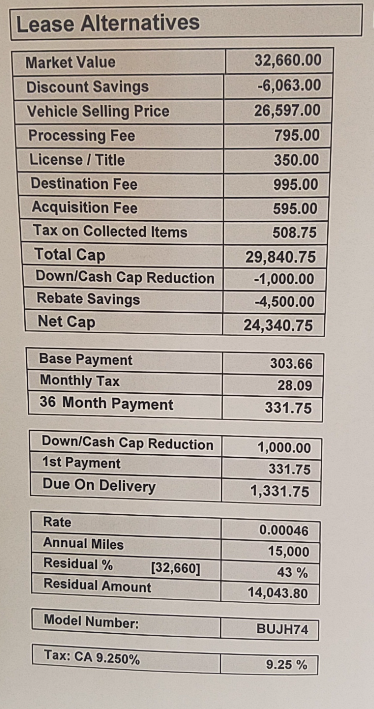 Do you think I could do better for this vehicle? Let me know what you think!

I’d say you did just fine. I think the residuals on Jeep’s make them tough for the long term but from a monthly payment standpoint it’s pretty close to the 1% rule.

Over Memorial Day I leased a Cherokee limited for $299 zero down sign and drive wit 12k annual miles and MSRP of $32,590 so I’d say pretty good overall! Tough to do much better on a 4 wheel drive jeep. I’ve been very satisfied with mine, especially using the heated steering wheel the last two cold mornings in Minneapolis!

Whats up with “Processing Fees” - smells BS; and Destination Fee as a separate charge?

Thanks for the feedback! I’ll certainly ask about that.

I understand, I am just saying that, in my experience, destination fee is included in the selling price and here it is a separate charge.

Good or bad, don’t fret the deal after you have signed. Just enjoy the car (and ask ahead of time in 35 months).

Haven’t signed yet thats the thing!

So why have you filed this under “Share a Deal” and said " Tell me how I did"?

Yes, tell me how I did negotiating this deal

Anyways, back on topic…

Changing the thread to more appopriate title and category.

Oh wow, didn’t realize you were that immature for a moderator.

Thanks for doing that!

Thank you @vhooloo - I appreciate it!

He’s the mature one here

The discount and rebates are solid, but the residual kills any chance of a great deal. It’s also strange that the doc fee is so high (should be limited by law to $80 in CA) and they are making it look like the destination fee is extra (it should be included in the MSRP).

It doesn’t look like a deal that’s worth paying for shipping or traveling out of the state to pick it up (can’t think of another explanation for CA tax but non-CA doc fee).