Worth a look. 33k Jeep Grand Cherokee Laredo - around 250 a month

With a 6k discount, this seems to be great deal for a solid SUV for the winter months … 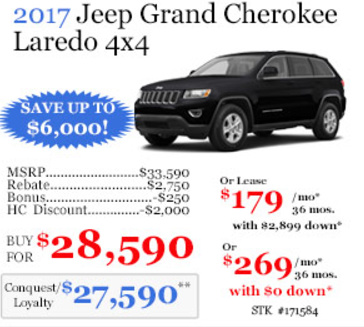 “Around 250” in the sense that the ad is for 269/mo + 795 bank fee, 349 doc fee, tax and registration. Also requires lease loyalty or conquest. Also is only available on one stock number.

Edit: the one under it is a bit more intriguing, but there’s no info that tells us where it is.

Not really. These are from 2 separate dealers in Mass - Herb Chambers and Quirk. That was even without trying, so I take it this is a sign that FCA is trying to clear out their JGC Laredo stock? And you will notice it is only on the Laredo, not any other trim …

That’s only $2k (6%) discounted off MSRP before rebates, which doesn’t seem that great. The hard part is probably qualifying for all the incentives/rebates they have included.

That’s only $2k (6%) discounted off MSRP before rebates, which doesn’t seem that great. The hard part is probably qualifying for all the incentives/rebates they have included

Yes, I agree. Which is why I think if you go and negotiate a solid 15% discount and then add the 3k incentives, you would be looking at sub 200 lease on a JGC. Is that a once in a lifetime deal? no. But is is a good deal if you need a decent SUV? I think so.

@vhooloo Quirk is the local dist for Jeep so between Quirk, Boch and Chambers they have New England lock on largest volume deals. Has anyone else stepped up to your numbers? And side note has anyone see good numbers like those in SoCal?