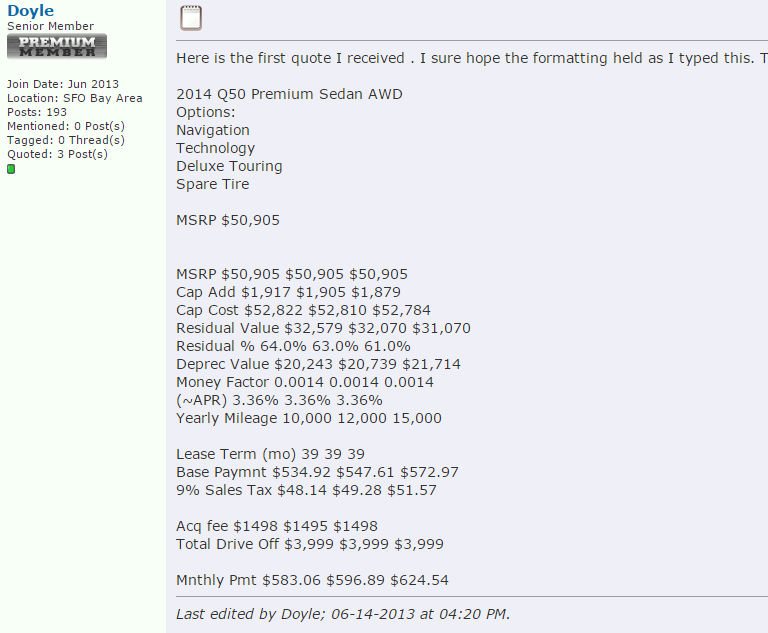 What happened with the other screenshot that showed $304/mo incl. tax?

I don’t doubt that prices come down but

(A) how long does one play the waiting game

The original screenshot did not fit my purpose too well, so I found a better one

I am not saying prices are coming down, I am going the other way - the prices at the start of any new model launch are inflated.

I addressed point 2 by making it a fairer comparison 50k MSRP vs 48k MSRP:)

And by this metric, Bolt should be 250 soon

Naturally every OEM hopes the new product will be an organic hit, and won’t require lease support. When sales tail off or don’t meet expectations…

Even if they are an “organic hit”, the manufacturer thinks, let us pump up the volume 10x since everybody wants our new car!

A few more months as the 2018 models come in

End of the month and $540 ish would be required.

And things like this don’t help either. Looks like $99 Hyundais should be possible in next few months

Associated Press
Tom Krisher, AP Auto Writer
Associated PressApril 7, 201733 Comments
DETROIT (AP) – Hyundai and Kia are recalling 1.4 million cars and SUVs in the U.S., Canada and South Korea because the engines can fail and stall, increasing the risk of a crash.

The South Korean recall includes Hyundai’s Grandeur and Sonata sedans and Kia’s K5, K7 and Sportage with engines produced from 2009 to 2013.

All have either 2-Liter or 2.4-Liter gasoline engines. The U.S. engines were made at the Hyundai’s engine plant in Alabama.

The companies say in documents posted Friday by the U.S. National Highway Traffic Safety Administration that debris left from manufacturing can restrict oil flow to connecting rod bearings. Since they are cooled by oil, the restriction can increase temperatures and cause the bearings to wear and fail, and the engines could stall.

Owners will hear a knocking sound from the engine that increases in frequency as the engine speed rises. They also could get engine warning lights on their dashboard, Hyundai spokesman Jim Trainor said. Those with problems should contact their dealers.

On the flip side, last month was a good time to jump on a Chevy and not wait.

You want the truth? You can’t handle the truth!

On the flip side, last month was a good time to jump on a Chevy and not wait.

If they are eliminating MSD, then looks like better get it now

lol looks like i’m going to go to my backup plan of the genesis 5.0. around june when the new model comes in so i get a discount. i’m thinking it would be possible for 500 a month.