Hey guys , just saw that my local dealership has begun to carry the new A-Class…thoughts on the car?

They’re gonna sell boatloads of these things and then when the new baby CLS AKA The CLA comes out next Year they’re gonna sell boat loads of that one too , the interior looks awesome in my opinion although it’s kinda dumb the price jumps so high once you spec it out nicely, ends up making no sense going for the A class fully loaded other than the interior is so cool and modern

Nice looking car. They should do well. Shame there isn’t an option for a bigger engine though.

We have two demos at our dealership and I must say I am very impressed with the car compared to the CLA. The 10.25 Instrument Cluster and 10.25 Digital Display are great additions to an entry level vehicle. The drive feels nice as well.

How are they leasing, are decent discounts available?

On a brand new car, I wouldn’t hold my breath.

I’m very sad we won’t get the hatchback version, unlike those pesky Canadians who actually buy them.

I meaaaan I like the look of it but not that much.

It’s a great looking car but they missed an opportunity by limiting it to the single anemic engine. I’m assuming next year they will fix this by adding an option for the turbo i4 all competitors have that will give it more reasonable pep. The cabin also feels slightly claustrophobic for a 6’1" tall medium sized man.

Remember when Mercedes was Mercedes…only the select few drove them decades ago, today however they have brought the car to the masses by creating a car where you can work at Walmart and live in you parents basement and afford to drive one.

Remember when Mercedes was Mercedes…only the select few drove them decades ago, today however they have brought the car to the masses by creating a car where you can work at Walmart and live in you parents basement and afford to drive one.

Hyperbole aside, I don’t think that’s a bad thing. If they can keep up quality and let people with less means enjoy their product, I think that’s great. People with an elite mindset can focus on the AMG/S/Maybach models and still be comfortable knowing they’re driving a “superior” machine.

For people that want exclusive badges, you can stick to Rolls and Bentley. I think the “Affordable” Bentley is still near 200k.

I wish that ALL car companies didn’t have to adhere to neutering their cars with Eco/Comfort mode defaults. Having to toggle my car into “sport” mode every time I get in is pretty annoying. I don’t see why regulators couldn’t allow the default to be user chosen.

For $50k why would I not get the C class instead?
The only appeal for this car was the hatch which we don’t get in the states.
I need a AMG 45 A class hatch in my life or whatever they want to call it.
I’m under lease till 2021 anyway so I guess I can always hope they release it by then.

Anemic? It’s got 188 bhp which seems perfectly fine for a small car to me.

In Europe they somehow cope with a measly 136hp in the A180 variant. The original (slightly odd looking) A140 only had 80 bhp and an A160 diesel with only 59 bhp! That wouldn’t be much fun on the Autobahn.

If it’s not 300+ Hp, then US buyers will consider it underpowered :P.

For some reason they’ll buy 152 hp subarus all day, though.

Mercedes and Bmw are the taxi cabs of Europe. So I’m not sure if badge chasing is justified

Anemic? It’s got 188 bhp which seems perfectly fine for a small car to me.

It’s a respectable engine for a small car, but it feels anemic by sporty standards. I think it’s a great base engine to start with and competes well with base engines from competing luxury brands. But my point is that for people that want 0 to 60 in less than 7 seconds competing cars offer upgraded engine options to get you there. Mercedes offers this for their whole lineup except for this car, so it seems an odd choice.

FWIW, I’m located in the USA and my opinions are only relevant to that market.

Yeah what you’re saying makes sense for this market. I would say it competes pretty closely with the A3 Sedan which has 184 bhp so it’s comparable. I think it’s aimed at people who want a nicer badge than a Corolla but don’t necessarily care about how fast it is.

It’ll be interesting to see if BMW finally brings over the 2 series ‘Grand Coupe’ which I think they already have in China and where they pitch that on the power scale. An M240i Grand Coupe to compete with the S3 would be interesting.

If this article is to be believed, it’s slated to be a global car… 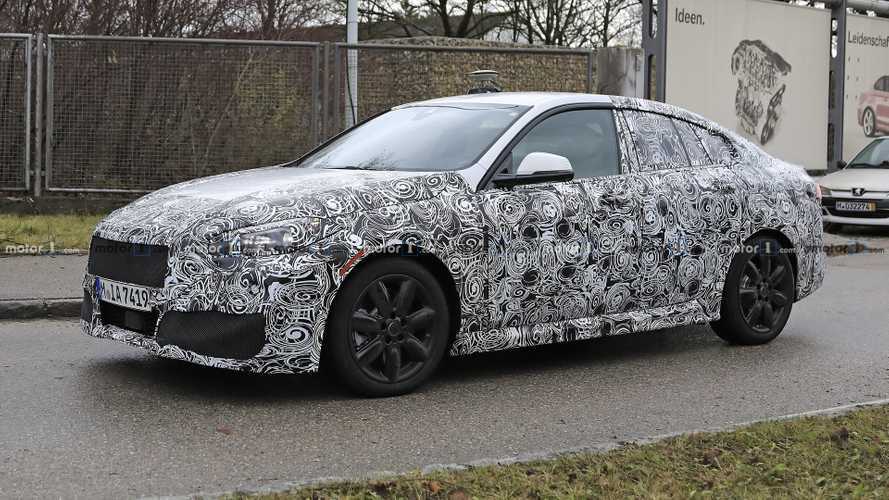 The new batch of spy shots allows us to have a look underneath the BMW 2 Series Gran Coupe where we can notice it rides on a front-wheel-drive platform.

Perfect! Just in time for literally no-one to buy it as they flock to X1’s and X2’s instead.