How Prepared are You?

With the recent events such as Harvey, Irma, earthquake in Mexico, SoCal (Westwood), North Korea and all the others disasters i’m missing.

Reason i’m asking is cause I had a discussion with the wife and we have no plans in place or emergency kits (food, water, etc) ready. Advice for how to prepare, what to prepare, where to get the items and anything else i’m missing.

Just a few items that come to mind, but i’m sure i’m missing a ton of other important items.

I’m pretty self sufficient as it is. I have a well for water and a propane tank that I always try to keep at least 1/2 full. And a yuugely big generator in case the power goes out (which it often does due to weather). Also have egg laying chickens, worst case scenario I’ll eat nothing but eggs for a few weeks. And a small garden that could sustain my family for a week or two in a worst case scenario.

Also a couple of guns and lotsa ammo in case anyone wants to come “share” my stuff, lol.

I live close to a city but far enough that I’m in the country. So I hopefully wouldn’t have to deal with rioting/looting. In big cities if the shit were to hit the fan…not going to be pretty.

And the NoKo thing…that’s about #1000 on my current list of things to worry about. Lots of bluster and not much else. But I can see an attack on the electric grid happening or water supply or something along those lines, happening easily.

Where do you order MRE’s? After last night’s Westwood shake, I’m starting to think I need to be more prepared.

You can save yourself the effort collecting those items if you are willing to pay a premium for a assembled bug out bag. They sell them on ebay and Amazon.

Where do you order MRE’s? After last night’s Westwood shake, I’m starting to think I need to be more prepared.

It’s always better to be a little prepared than not prepared at all. You can get the MRE on Ebay or Amazon. You can make your own MRE if budget conscious by collecting canned food and protein bars. The only benefit of MRE to me is the weight, but I can’t lift more than 20lbs, so that’s a limitation.
Lifestraws are great, but you still need the water to filter it with, so collecting the rain water is not a bad idea.

There is a good book on this subject
"Emergency: This Book Will Save Your Life" by Neil Strauss
https://www.amazon.com/Emergency-This-Book-Will-Save/dp/0060898771 ( No affiliation )

I’m planning on ordering this to try out, https://www.amazon.com/ULTIMATE-Inspection-Western-Frontiers-Guarantee/dp/B01EDB3H2Y/ or you can search for MRE on amazon for other options.

There are other variations of MRE. I can be wrong but it looks like military MRE contains other essentials such as wipes, creamer, coffee, matches?, etc., while there are other suppliers that just provide food.

ORIGINAL RUSSIAN SPACE FOOD and NUTRITION IN TUBE (115g) ISS, MIR, NASA. The space is just necessary and sufficient. The infinite Cosmos does not tolerate excesses and wastefulness. Legendary food, developed on the basis of the fundamental...

How about Borscht in a tube?

There is also just the food supply, https://www.amazon.com/Augason-Farms-30-Day-Emergency-Storage/dp/B00IW1NQDC.

As for the MRE, this is what one of the reviews (By Just a Country Boy on October 13, 2016) wrote:
The real deal, right down to the big spoon and toilet paper! My sons and I opened one and tried it out just to see if they were posers or the real deal. We opened case B and tried the beef ravioli. The meal included:

So it looks like an all in one package. I’ll probably get both, just to be on the safe side.

Does anyone suggest getting a spare 10 gallon fuel container? Is there a proper way to storage this? How long can it be stored?

That’s very interesting! Is it like paste? Would that be filling?

Thank you! I might actually buy that pail. Seems like a really good cost for 30 days worth of food. Any recommendations on how best to obtain the 18 gallons of water required to rehydrate the meals?

I bought the lifestraw (http://lifestraw.com/products/lifestraw/) for emergency use once i’m out of my stockpile of water I got from Costco.

MRE, shemMRE. Didn’t we also say we needed a toyota hilux with a 50 cal in the bed for the end of days?
Although I am liking the jeep too. In fact, I would argue if you had one of those, “commandeering” food and water would be the “easy” part … 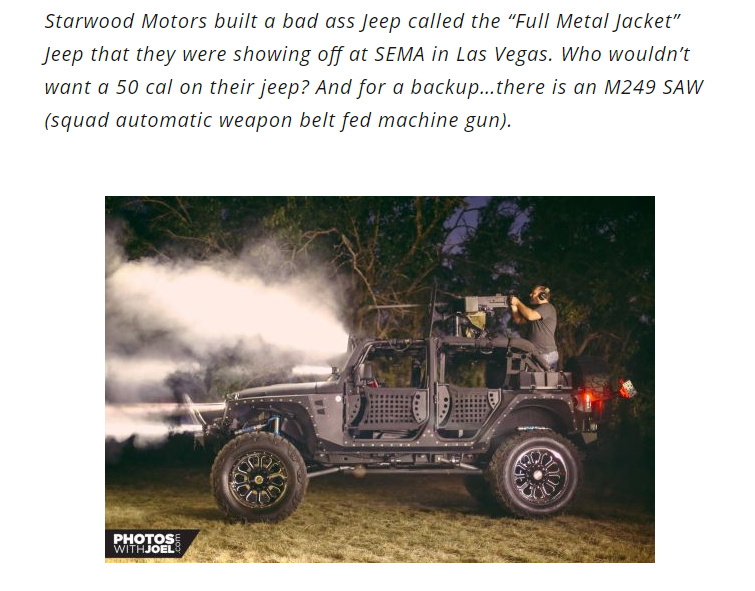 LOL, what kind of license do you need for something like that, but then again if the world has gone to poop you wouldn’t need a license…

Several situations come to mind. You may be prepared with MRE and all but the angry and hungry hordes outside want you to “share”. So this can definitely convince wanna be “looters” to move to a different neighborhood.

Second, the angry unprepared hordes may be upset with authorities and stage protests and roadblocks. The above should clear any “human obstructions” in your way.

Finally, you may need to take down a tree and not have a chainsaw handy lol …

The sad (because we are slowly forgetting the skill) and funny (been on this forum) skill we all need is communicating/negotiating and living among other people, you can call it people/hacking (didn’t come out right did it?). Your friends and neighbors are the best possible asset and possibly your worst enemy in the survival situation. You literally can not physically handle all necessary activities of growing and preparing food, protecting and filtering your water source, defending your perimeter, sleeping/resting and on and on, unless you have a huge family that actually likes you