BMW USA is still showing $750 for 3 series loyalty (they have updated the dates).

BMW USA is still showing $750 for 3 series loyalty (they have updated the dates).

That is definitely strange because here’s a clip right off my program sheet. Looks like $1,500 to me. 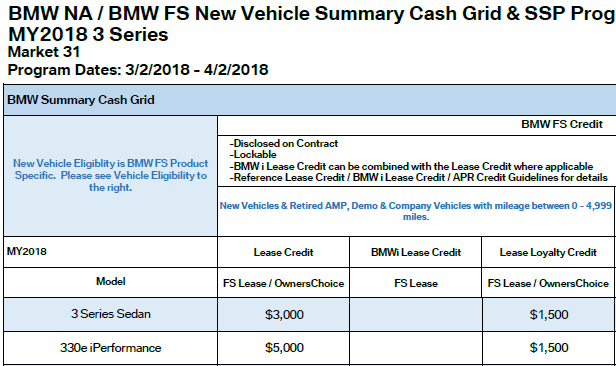 Crazy to see such low residuals on the M2, that car since it came out has suffered from almost no depreciation. I guess they don’t expect anyone to lease it since dealer alotments are limited?

Someone on the web team made a boo boo!

Over 500 miles = .25 cents per mile. Over 5000 miles subtract 4% from residual and calculate mileage penalty as well.

It may be region specific but you can always tell them that you’ve seen the program sheet from a CA in SoCal and it clearly states $1,500. Ask to see theirs. Doesn’t make any sense for a dealer to hold back funds that they can’t keep for themselves so either they don’t get the same as we do or they haven’t received their updated sheets yet.

Hey @BMW_Dave looking to get a new x6 with a $73k MSRP. What should I shoot for when it comes to sales prices? Money factor seems kind of high, any way to lower it?

No way to lower MF. If you want to PM me the specifics I will reply as soon as I’m able to.

Yes, that was my thought as well, however, someone said they found it was 300 on bimmerfest

He is saying regional, said his sheet shows 750… part of me thinks they just don’t want to redo the paper work. I’m out of state and they are overnight paperwork that should be here tomorrow.

Thanks for confirming @GAngellBMW! And there you have it @Driving0. You can proceed with confidence.

I saw 1.5k loyalty advertised by a dealer in DC area. I even posted it yesterday somewhere.

For all the lurkers…please do not email me asking for any deal under $200/mo or even under $300/mo when you have no BMW in the household and no Corporate Fleet and no eligibility for recent college grade rebate. The unicorn deals that you see on these forums, that you want and are asking for, are established by very heavy discounts as well as maximizing the factory incentives that are available. I’m not trying to be rude but when I get tons of PM’s and emails like this one (which was real)…

Do you have anything (Used or New ) available around less than 200/month with least possible down payment.

…it takes time away from real inquiries from people that have read my profile and know what info I need from them and are still waiting for a response on an actual in-stock car that they are interested in taking home today.

This is also me apologizing for not getting back to everyone that has not heard from me yet. With my kids having been sick and then having a couple days off, I’m about 4-5 days behind on emails and PM’s so don’t think that I’ve forgotten about you. It’s just that when I read that email I had to take a minute to remind folks that I’m here to help - and to get great deals with little-to-no negotiation - but I still only get paid on sales and we can save each other valuable time if you do some of the work on your own…and come in with realistic expectations, not just a request to match the greatest hack-deal ever recorded.

I’ll be back on it tomorrow. Good night all!

@Ursus had posted the info here on this thread

From BMW of Alexandria’s website
THE ADVERTISED PRICE INCLUDES ALL BMW NA/F.S. INCENTIVES/REBATES. CURRENT BMW OWNERS GET AN ADDITIONAL LOYALTY CREDIT OF $1500 ON THIS VEHICLE WHEN FINANCED-LEASED W/ BMW F.S.

Hmm, it wouldn’t happen to be this guy?

Cheapest car to lease with no money down Ask the Hackrs

Was wondering what’s the cheapest lease out there with zero money down ??